Posted on June 18, 2010 by Beartooth Flyfishing

After a morning of work, and staring out the windows at an absolutely gorgeous, sunny day, the boss said “no mas!”. We had lunch, wrapped up a couple minor projects, then loaded up the truck and headed to the river for some wade fishing.

As usual, it was the right call. That’s why he’s the boss. The fish were as happy to see the beautiful weather as we were; and oh boy, were they biting! We started our trek with a very short drive, straight down the hill behind the lodge. It wasn’t long before the “woo-hoo!”s started, as rods bent, time and again, with hungry Madison River trout, punctuated with majestic leaps into the crisp air.

After a good run of fish behind the lodge, we started working our way up the river. A handful more trout accepted our offerings at another of our favorite holes, then we made the move to our third stop. We again fished in solitude, with no other waders in sight. And like the first two stops, the fish were hungry and eager, the only difference being, they were even hungrier. Dan, “The Man,” caught 10 trout in one section; six of them coming from one hole … My ears are still ringing from the whooping and hollering.

My highlight of the day, along with the beautiful trout I was landing, was the fact that I was catching them on my favorite wading rig; a 60-year-old Granger bamboo rod, rebuilt by Dan, and a 50-year-old Hardy reel … Catching wild trout on the Madison River with vintage gear … Priceless! 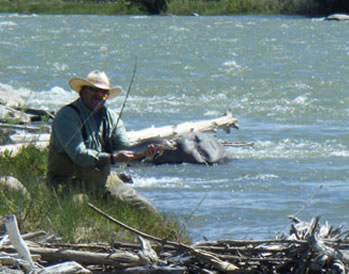 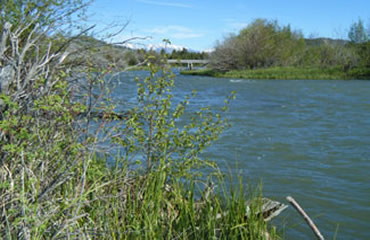 Oh, and the reports we are still hearing about the Madison being blown-out. Well, for lack of a better term, they are blown-out, of proportion. Just check out the water in the pictures. It’s not muddy. There is a stain, but with good clarity … And, as I may have mentioned already, the fish are biting — hard! Customers who stopped at the shop for a shuttle called later today to confirm their good fishing results and success with the same flies we used and streamers too..

So grab your gear and go fishing!