Posted on June 16, 2010 by Beartooth Flyfishing

We fished from about 10:30 to 6:00PM near Three Dollar Bridge. It rained on and off all day. We tried different combos all involving a stonefly with either a Delektable Lil’ Spanker trailer or a worm pattern. We caught smaller fish in the beginning of the day. Drew caught the largest fish of the trip; it was a brown. 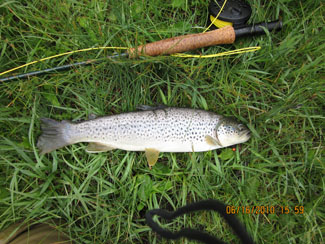 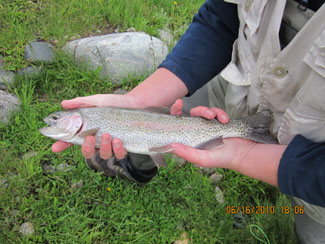 The water was much cleaner. The stone flies seemed to be working the best. We established fishing routines each of us liked: Drew likes to fish around islands and where slow water meets fast water where he seems to catch the most fish; Joe likes to fish behind boulders and log jams, also along the sides of the river.The island fishing requires much more wading which results in more falling in. Yikes! that water is cold! 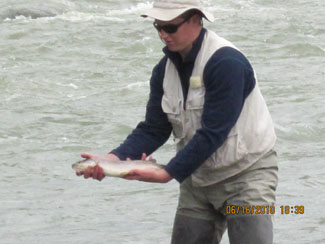 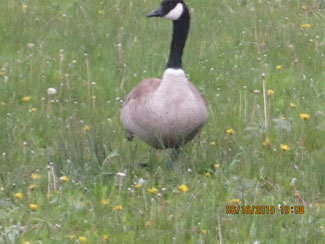 The family of geese were still there following us along with the goose above with one leg. We couldn’t figure out how it was so balanced. This was our last day. We had a great time and will really miss Montana. We have our gear and knowledge to bring home with us to fish there. Until next time……

On our second trip to Three Dollar Bridge, we caught and landed five fish a piece, Yeah! On this outing we chose to cover a much larger area instead of focusing on any one specific area. It appears this was a better strategy for us because it resulted in a lot more bites. 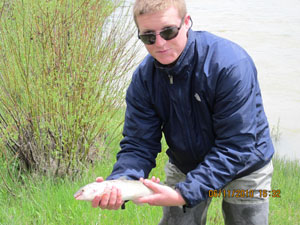 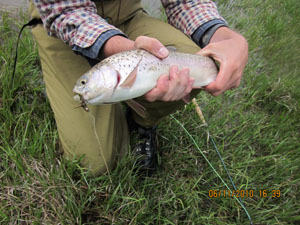 Early in our fishing adventure, I caught a nice size Rainbow. While Joe was enthusiastic for me, he was also frustrated because he needed a fish fix. Luckily, Joe emerged today and caught some really nice fish, and our largest trout so far. 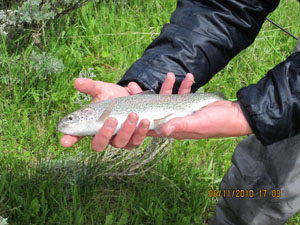 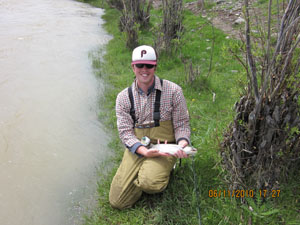 Our casting has greatly improved and is likely one of the major contributors to the day’s success. We had fewer tangles and more accurate placement. This allowed us to spend more time fishing and getting the bugs closer to the fish instead of de-tangling. 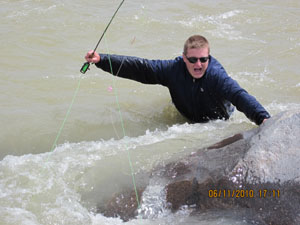 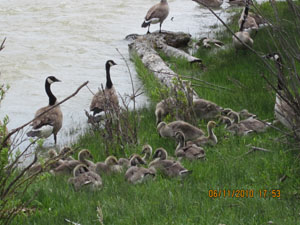 The picture of me in the fast water, screaming, shows me as I retrieved a fly from the fast moving current. I was calling for help. Instead of giving me a hand, Joe took my picture. Do not try this at home! I made it to shore OK, but what an experience! The flies of choice were the same. The scenery was terrific. We caught and landed trout. We were also followed by a large family of geese, as curious about us as we were of them.

What a great day!