Despite reports to the contrary, the Madison River is NOT blown-out. The tail-end of the recent warm weather put some dirty water in the river, but it remained very fishable with only a ribbon of colored water on one edge. The cold temps of the last couple of nights cleared up the influx of the feeder creeks and the modest amount of "dirty" water has become only a stained tint in some areas. The vast majority of the river is clear and all of the river is very, very fishable.

I had the pleasure of guiding Matt and Pam on the Madison River, and the mild weather, along with crystal-clear, perfect water, accented two wonderful days on the river. .. And, oh yeah … The fishing was great! Both anglers said it was some of the best fishing they ever had. 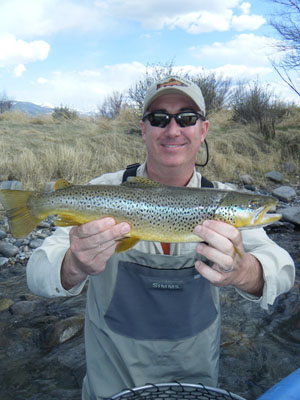 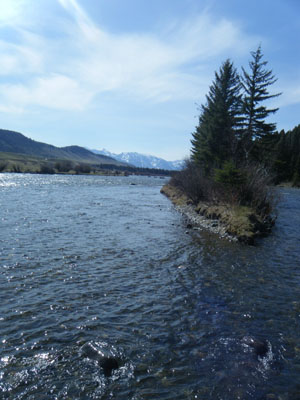 The first morning of fishing started a bit slow, with very few bugs in the air and only a handful of fish caught before lunch. But after our lunch break, we saw more and more bugs, with the occasional thick swarm of caddis filling the air, and a mix of mayflies thrown in for good measure. The bugs, like the weather, were off and on. There was a back-and-forth mix of sun and threatening rain, with fisherman putting on jackets, taking off jackets, putting on jackets, taking off jackets, etc. …But no matter; when the sun was out, and the air was warm enough for short sleeves, the fish turned on! And along with the great numbers of fish, the big fish were eating flies hard, with multiple runs into backings and high, majestic leaps out of the water. The anglers were whoopin’ and hollerin’ down the river, and grinning from ear-to-ear for pictures. What a great day! 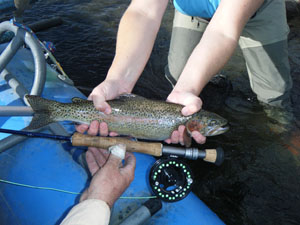 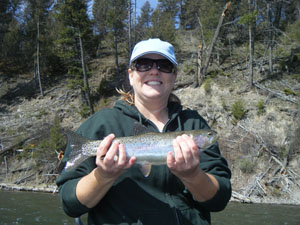 Our second day again saw a good number of quality fish, just not as many of the photo fish. It was also a flip-flop of the previous day, with the morning fishing hot right from the start, then becoming slower but steady though the middle of the day, and a very slow bite in the afternoon.

The couple left with huge smiles and a camera full of great memories.
Thanks guys for two fun, wonderful days on the river. 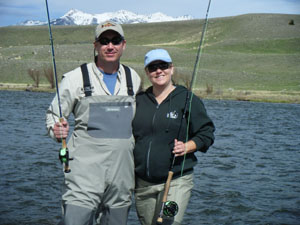