Posted on July 17, 2012 by Beartooth Flyfishing

After nearly two decades of fishing the Madison, several years stand out vividly as far as fishing is concerned. 2001 comes to mind as one of the best but 2012 was right up there with some of the best fishing my Dad and I have ever had. Guides have been telling us for years to fish the Beaverhead, especially since both us are used to fishing nymphs. I never really understood the “dry fly or die” mentality. What is the problem with fishing nymphs or streamers into Delektable buckets with lunker sticks stacked like cord wood?

Dan told us the Beaverhead had been “on fire”, so we chose to make the drive “over the hill” to try it. The weather was perfect. Temps were in the mid 70s and there was cloud cover. PMD’s were hatching as well as some Yellow Sallies. The river just had the look and feel of a big day. The party that launched their boat before us at High Bridge fished the boat launch, and landed an 18” brown. My Dad and I caught 3 mid-size browns right off the launch before we even stepped into the boat. There was definitely something electric going on. 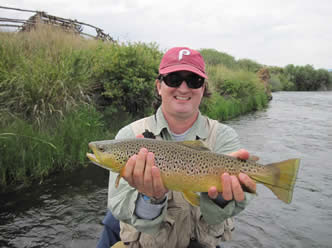 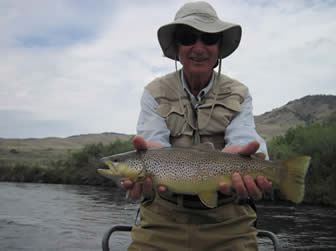 I’d love to continue with how perfect the trip went but frankly we got off to a brutal start. For the first 30 minutes, we were victims of either not enough sleep or not enough coffee, fish getting off prematurely, split shot bird nest snags, decorating the willows with colorful strike indicators and two fly rigs, breaking off on logs (or lunker sticks), fish straightening our hooks, and there was the older fisherman who thought that he’d commence the trip by testing the waters. He doggy paddled his way around a prime pool snorkeling for nymphs and subsurface activity, all while taking water over his waders as he fought the 900 cfs and scrambled to safety of the willow-lined banks.

After “acting like clients,” and testing Dan’s patience, the Beaverhead started producing some big fish as the nymph bite turned on. I hooked a brown that jumped three times and caused some consternation for Dan as I did my best to lose the fish by letting it swim under the boat rather than lift its head and skid it across the surface. Dan skillfully made some maneuver where he quickly pivoted the boat, cleared the oar from potential a snag break off, and deftly scooped the fish. It was a brown that weighed 5 lbs. The next brown was a little lighter at 4 lbs. The float just became more and more ridiculous, especially in the High Bridge to Henneberry stretch.

To the dry-fly-or-die reader, we didn’t only catch them on nymphs. Dan found a run that slowed down before it went into an irrigation channel, and my Dad fished dries. He landed a plump 17” rainbow on a size 16 dry. We even saw other boats that were only fishing dries. The nymph bite was so strong that we didn’t try to force the issue with dries, and stayed with nymphs. What nymphs were they taking? To quote Grandpa Delekta, “they were taking beadhead nymphs.”

We floated all the way to Barrett’s and caught fish from boat launch to boat launch. There was one slight lull after lunch, which may have been the fisherman feeling sluggish after having one of the best lunches (Thank You Nancy!) ever. We went to a lighter rig after Pipe Organ Bridge, and when we went back to heavier split shot, we instantly started catching fish. 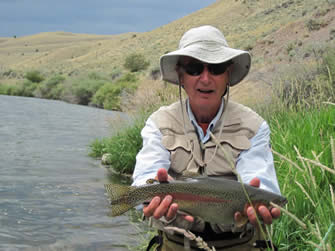 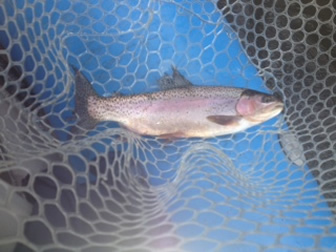 After smiling the whole way back to Ennis, we decided to do the same float the very next day. It was one of the best float trips we’ve had (well, since we floated the Big Hole with Dan last June), so we decided to do it all over again. That night, I couldn’t sleep, so I read about the infamous stretch from the Dam to High Bridge. My insomnia was not helped by rumors of 15 lb fish in an area known as “The Slick.” I became more anxious when during the drive Dan took 20 minutes telling a story about a 26” rainbow caught in the Slick several weeks ago.

The Day Two Float started at Buffalo, where we caught two fish immediately after launching. They weren’t exactly the fish I’d read about. In fact, they were fish that more than likely got themselves hooked to avoid being eaten by a 15 lb brown. Fishing The Slick was nerve racking. It was so quiet. The surface was glassy and with the high flows, there had to be areas that were more than 10 feet deep. We waited as our nymphs slowly made there way down. We waited for a quick strike. Waited. Waited. Waited, but nothing took. Not until there was a loud detonation three feet off the boat, and a rainbow that was two feet long, shook its head and tailwalked like a marlin off the Kona Coast and then, and then, and then line went slack, and there was nothing… Checking the hook, revealed that the beast had straightened the hook. The legend of The Slick continues, and our dreams of landing a mythical fish faded away as we floated out of the shadows of High Bridge back into reality. 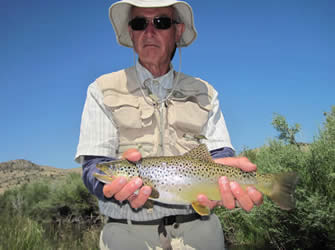 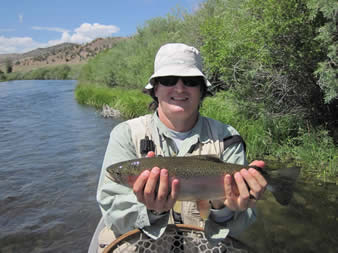 The stretch below High Bridge to Henneberry proved to be really active as we caught and landed some beautiful rainbows. The float on Monday mostly produced browns but with the weather being more bright and sunny and temps in the low 80s, the rainbows were out. The action was bordering on ridiculous, and with the clear conditions, it felt like we were floating through an aquarium, as we spooked fish (big fish) as the boat drifted over them. We got out and waded some island areas and caught fish. We got back in the boat and caught more fish. Every island drop off, shallow riffle, deep pool, boulder slick, backwater eddy, and “Delektable bucket” seemed to “hold lunker sticks stacked like cord wood,” as we caught fish from boat launch to boat launch.

High Bridge to Henneberry proved to be remarkable both days. The action was pretty much non-stop throughout both days. They were two of the best days we’ve ever had. Some of the fish reminded me of New Zealand trout. The Beaverhead was truly on fire. After putting it off for over a decade, it was truly worth the drive over the hill. 2 days on the “Beav” and 5 days on the Madison comprised one of the best weeks, we’ve ever had. 2012 has been an epic year. I’ll spend the next two months thinking about the rainbow that got off in The Slick and some of the lunker sticks that broke off and wonder how I can convince my family to let me return in October… Mahalo!