Posted on August 9, 2009 by Beartooth Flyfishing

The Jan and Ken group was back in town for some Madison River therapy. 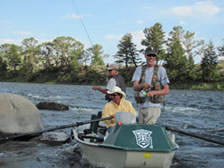 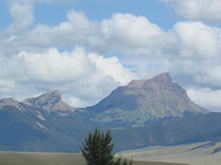 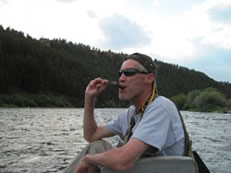 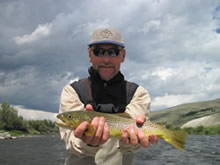 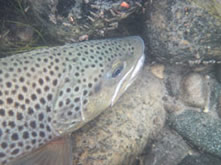 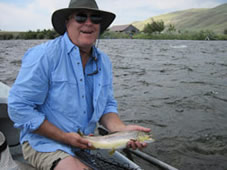 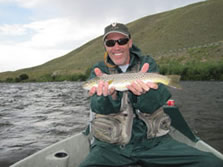 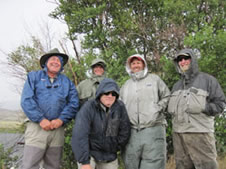 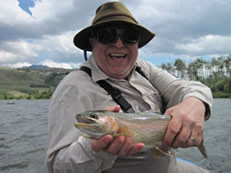 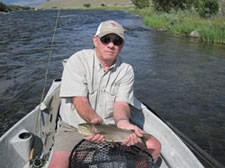 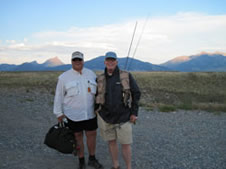 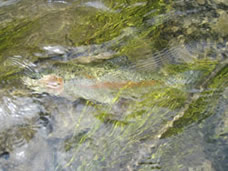 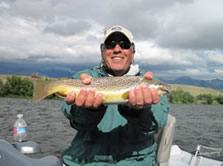 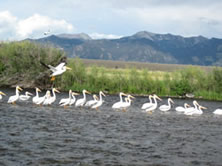 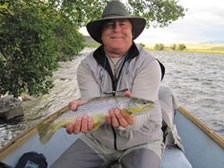 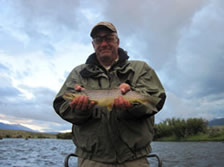 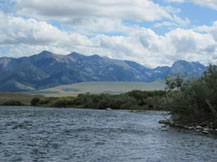 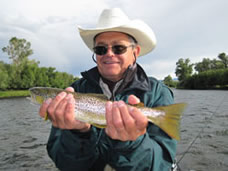 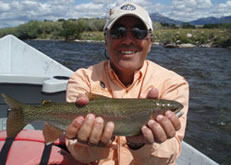 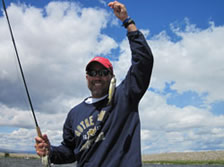 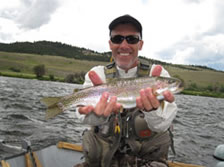 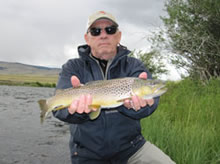 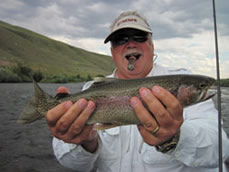 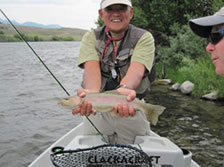 Four days in a row of sun, wind, rain, clouds, hail, cold, warm; a healthy dose of Montana was had by all. The group was great, catching trout, making new friends, enjoying the Madison River Valley. The smiles, handshakes, and conversations tell the story. Flyfishing takes you to some of the most beautiful places on the planet. I refer to it as soul food and highly recommend a good dose. Take 4 days in a row and let us know how you are feeling in a couple of weeks. Review the gallery of photos. You be the judge; priceless!

Bunny Fur and Hoppers…that’s about as good as it gets…The last week has been good…Really Good. Bright bunny fur has been working well in the morning (6-10:30 A.M.). Natural Zonkers, JR’s CH Streamer in Olive/White, and the Delektable™ Badger Screamer tight lined through the middle and in the deep Trenches next to the big rocks have been deadly. Try dropping some sz.18-20 mayfly emerger’s off the back of the bunnies to replicate the Trico’s, Psuedo’s, PED’s and other small mayfly’s we have been seeing up by the shop lately. The Soft Hackle Pheasant Tail and the Micro Mayfly have been my trailer’s of choice in the morning’s. 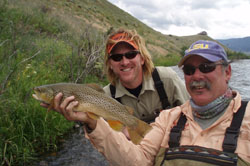 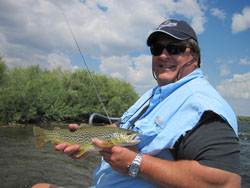 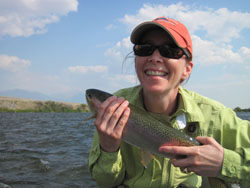 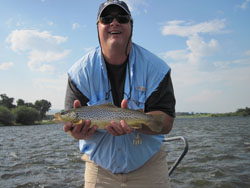 Once you start hearing hopper’s buzz the around the bank, tie on a flesh colored Three Decker, a Rainy’s Grand, a Red Slammer, a Tan Carnage Hopper, or your favorite hopper pattern and HOLD ON! Keep ‘em a couple feet off the bank or on the small shelf’s created by gravel bars in the middle and never judge a fish by the size of the strike. The biggest fish will move the smallest amount of water sometimes when eating hoppers, not to say that some big fish won’t give the classic takes, but a lot of the time they don’t even break the surface…they just suck ‘em down; never judge a book by it’s cover kinda deal. Other dries that have been working well in the afternoon include: the Delektable Flying Ant in cinnamon or black, the purple Twisted X in an eight, Half Downed Hoppers in a 12, gold Turks Tarantula’s in 12’s and 14’s and the rose Twisted X in a 16 have all been good second’s in a two fly rig. However, if I can find a single fly that is getting a good amount of attention, I will usually keep it at just the one…We had a good amount of rain and colder temps coming about in the later afternoons, and when that happened I went back to the bunny. 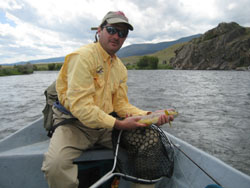 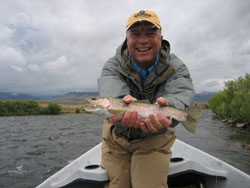 The lighter colored streamers weren’t producing like they were in the mornings but the darker colored ones were moving some large fish under the clouds. Olive and Black were the colors of choice during the late afternoons (4-7). The Olive MCCune’s, the Black Christmas Tree, and Shiela’s Sculpin (which isn’t olive or black, I know) have all been good producers later in the day. The small mayfly trailer’s I previously mentioned have still been working in the afternoon, but so have Prince Nymphs, Lightning Bugs, and a range of Caddis emergers. Tight to the bank or short stripped through the middle, these combo’s have been deadly under a little bit of cloud cover. So whether you’re a dry guy, a streamer guy or a nympho, you’re gonna be happy, so GO FISHING!!!

Photos from that week added by Nancy