Posted on August 28, 2009 by Beartooth Flyfishing

’Tis the season … for extremes …

Overall, fishing has been really good lately, punctuated by some of the friendliest, most pleasurable clients a guide could ask for. But mixed in with those days of constant calls of “Fish on!,” there have been perplexing days when, despite great conditions, the bites were not nearly as consistent.

Such was the case this past week. Dan and I guided a group on the Big Hole River, with stellar results. That was followed the next day with me and Charlie on the Madison, enjoying some absolutely phenomenal fishing with our clients. The guys were whooping, hollering and laughing when we reached the take-out – what a day! … The next morning, Charlie and I couldn’t wait to get back on the Madison, with the memory of the previous day’s fishing on our minds, and a clear, warm sky beckoning to us; we were chomping at the bit to get on the water! … But it was one of “those” days … The guys caught fish, and had a great time, but the bite was slower, much slower, than the day before. The only difference in conditions was a mild north breeze that produced a very moderate drop in air temperature, but noticeably, there was nearly a complete lack of hopper sounds on the banks. The day before, we were serenaded by a resounding chorus of “clicking” from the tasty morsels flying around all day … Such is fishing … And as the true nature of fishing, a handful of quality fish, and a day on the water in pleasant company on one of the most beautiful rivers in the world was nothing short of a wonderful day filled with great memories. 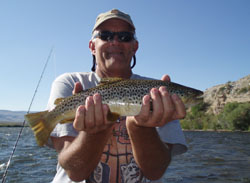 Hoppers and ants have been the flies of choice. The Morrish Hopper, along with the Delektable Twisted X in tan/brown and olive/gold, produced most of my better fish. The Delektable Cinnamon Ant, along with a variety of small Trude patterns, were also providing quality and quantity.

Fishing has been a bit sporadic … some days are really good, some days are more challenging. There have been a bunch of twinks, with better fish mixed in, tight to the banks and in the non-descript middle. Less action has come from the rock slicks lately, at least not ones that are eating hoppers and ants. 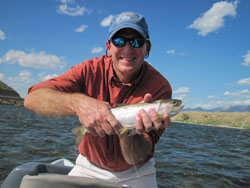 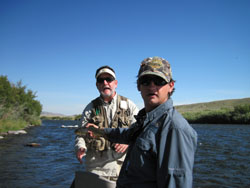 The Half Down Hopper has still been one of my “go to” patterns, as well as the Yeager’s 409 in red and the Neversink Trude. The # 10 Royal Trude has been producing nice fish in the morning and the Royal Wulff has been a good “go to” when fishing a single-fly rig. Tight-lining a Natural Zonker to a #14 Prince Nymph has produced some consistent action, although the bigger fish have not been taking it. A hopper pattern that has been somewhat consistent is Morrish’s Hopper, which I’ve been running in tandem with the Half Down Hopper or an ant pattern with good success.

The flows are back down below 1,000 cfs, so long, downstream drifts are a big help to fool wary, late-summer trout. The low flow has also made 4x the standard tippet with the dries, and I have been seeing a lot of spools labeled with a 5 on ‘em; I hate to drop that low but when the situation dictates …

Whether they want to look up or not, it’s finally sunny and warm, so GO Fishing!!