The third Saturday of May — opening day since the mid-1990’s for the Madison River from Quake Lake to McAtee Bridge — has become a traditional father/son fly fishing outing for “Grandpa” John, 86, and Dan Delekta, 51. The duo had a perfect Saturday, fishing Delektable™ Hurless Stones in Olive and Gray. Also, one of Dan’s new stonefly patterns, a prototype for 2010, was working; love that R&D! They floated an 8-mile stretch with a blend of wading and float fishing. The boys hooked and landed almost 30 Madison River fish. 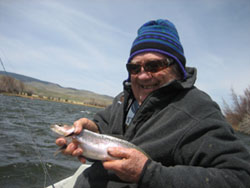 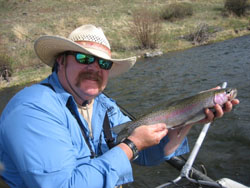 FISHING REPORT FOR EARLY MAY 2009

Fish seem to be a little confused with the weather (like the rest of us) and fishing reports have been sporadic; they are eating but making us work a little harder for it. The ‘ol Big Bug/Small Bug nymphing combo has been the best method from most of the reports and when I say small, I mean small. Mayfly nymphs #’s16-20 and midge larvae or emergers (like the Delektable™ Twinkle) #’s 18-22 trailing under a # 4-8 stonefly nymph has been the best bet. An Olive or Grey #6 Delektable Hurless with a #18 beadhead Pheasant Tail has been one of the few consistently good setups. With the thermometer reading below 32 most nights still, low early morning water temps. have resulted in slower mornings. Warmer, overcast, afternoons have seen the fish activity picking up from 1- 5 p.m., the late afternoon clouds have resulted in good hatches of baetis everywhere from Town to MacAtee, BWO’s have been spotted on the Beartooth porch and caddis have been seen from Town to 8-mile and are moving upriver every day. If the standard nymph rigs aren’t working, try tight-lining a #2 Zonker to a #16-#18 Delektable Spanker in Silver, Pheasant Tail, or Blue for the mayflies, and a #14 Green Spanker for the caddis.

Lower temps have led to increased visibility on the Yellowstone and better reports from the Big Hole, with a noticeable decrease in pressure on the Upper Madison as a result. However, we are starting to see more and more wade-fisherman between Town and Varney –boat fisherman should remember that these fishermen have the right of way. Please do your best to leave other fisherman’s holes alone. A little bit of etiquette goes a long way on an increasingly pressured river.

More difficult fishing has made me change tactics with good results. Increased leader and dropper length has made a big difference in the last ten days. If the average 7-9 foot leader isn’t working, try going to a 10-12 foot leader with 18-28 inches between your first and second bug. This is using tippets from 2X-4X. It’s a little harder to manage, especially in the wind, but it has seemed to increase the number of fish in the boat. The trick with long leaders is picking up less line before re-casting and making less false casts. If you are used to picking up 15 feet of floating line and making three false casts, try picking up ten feet of line and making one false cast, this will reduce the chance of tangles with the added leader length.