After my first week working in the shop I was given an afternoon off, so naturally I decided to go out and fish. A couple buddies of mine from Bozeman met me up at the shop and we decided to float Lyons to Palisades. The weather was changing every minute from sunny to cloudy and some rain in the mix. During this day we never saw another boat on the river. 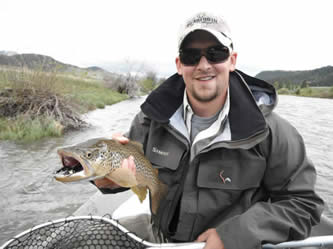 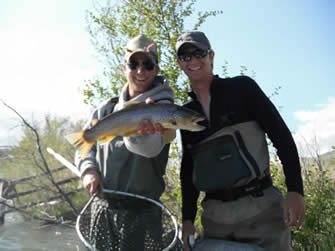 We started off fishing streamers, the Delektable Double screamer and the Flash fry worked really well. The fish seemed to like the darker flies with some to a lot of flash. The straight retrieve worked but when you added some variations into the retrieve such as twitching or jigging, the strike was almost instantaneous. Once we realized the streamer bite was on we started throwing double streamer rigs which turned out to be deadly. This allowed the rear fly to be fished deeper so we were able to fish multiple depths in one retrieve. Right now the water color is an off green with a foot to a foot and half of visibility which really allowed us to get close to the bank and all of the pockets behind boulders.

I was able to get out and wade some of the Madison below Varney this afternoon for a few hours and was not dissappointed at all be the results of just sneaking along the edge of the river and high stickin the pockets and seams. The water vis is about 1.5 to 2 feet now and is just a killer grey/green color. I started out with the Delektable Hurless Olive Flashback size 8 with a neon green caddis emerger trailing it. That did very well and produced some 10-15 inch fish, both brown and rainbows. I fished caddis emergers and pupas as my dropper for a while, switching out between different caddis patterns, but eventually I gave in and tied on other Delektable stones as a dropper because they were doing so well…and proceeded to crush it 🙂 Don’t let the color of the water deter you, the fish are hungry and very active. I pulled around 20 in a few hours with no regrets of going out. No real monsters, but a fish on the line is still a fish on the line! And of course I lost that "big one" and had some choice words for that particular moment 🙂 I did land one brown trout that went about 18 inches. There are not a ton of people out right now. I didn’t see a single boat pass me below Varney Bridge during the couple to 3 hours Bill (my 7 week old red heeler) and I were out there. And there was a beautiful sunset to capitalize on the day! Happy Fishing!

Dan, the new Dan in the shop