The Upper Madison from Quake Lake to McAtee bridge will open this Saturday. This will be a welcome event for both anglers and fish, especially the fish from Varney down, who have seen an enormous amount of pressure the last several weeks. It would certainly be good if the FWP would leave Lyons to Town open all year. This would have little, if any, effect on the spawning conditions for the Rainbows and would relieve some of the pressure from Varney down during the early Spring–a great time to fish the Upper Madison River.

The flow on the Upper Madison is around 1000 cfs and stable. Water clarity is very good. This should make for excellent conditions for Opening Day. The warm weather predicted for this weekend will probably change that soon, as the high snow begins to melt. As the melt increases and the West Fork discolors the river, the river will still remain clear down to the West Fork.

The vagaries of the lower elevation snow melt have affected the fishing recently. It’s been pretty slow up at the Beartooth Fly Shop, because of the closure of the "Upper Upper". So we have taken advantage of the opportunity to get out and do some fishing, before all the activity of the regular season begins. Sunday (the 4th) Dan, Marty, and Brad took an afternoon float from McAtee to Varney. We had some great action on nymphs–large stoneflies and small Lil’ Spankers and Dan caught one fish on a dead drifted Delektable Christmas Tree streamer. But Dan gave up fishing the streamer after awhile and went back to nymphing. The "Fly of the Day" was a Lil’ Spanker-red-#18. 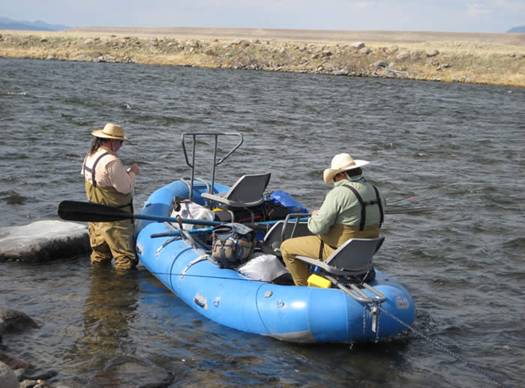 On Tuesday (the 6th) the boys went out again and had a very slow day. The warm days on Sunday and Monday had increased the melt, put some cold water into the river, decreasing the temperature and slightly increasing the flow, and this made both the insects and the fish lethargic. Starting off, we had absolutely no action on nymphs, so we switched to streamers. We had some slow action on streamers, but got several very nice size fish. We didn’t catch a fish on a nymph until late in the afternoon, when Dan caught a nice brown on one of his Delektables in Development–a brown stonefly pattern, which he had tied that morning and will be available next season. Here it is: 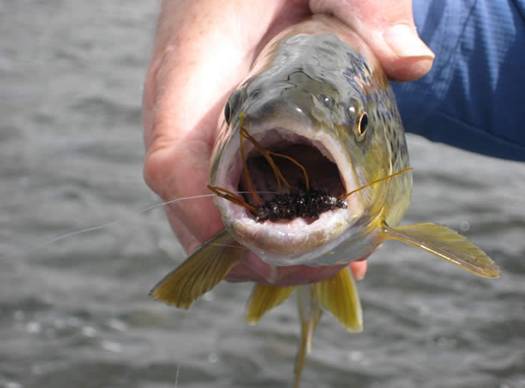 Below Varney it was almost all streamer action, with the Delektable Double Screamer–Olive and Yellow–catching the most fish. There was a moderate baetis and midge hatch late in the afternoon and one fish was caught on the surface on a #20 Adams Cluster. Things had definitely improved by the next day , when Gunnar went from Storey to 8 Mile and his clients boated over 20 fish (from 12" to 20"), on the same Olive and Yellow Delektable Screamers. 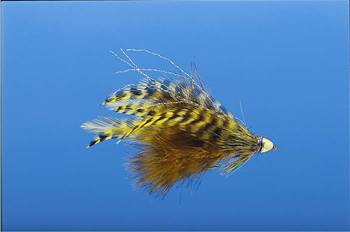