Posted on June 7, 2009 by Beartooth Flyfishing 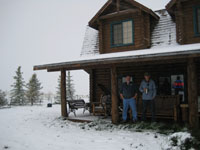 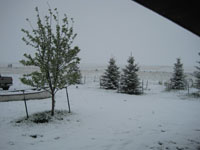 The Madison River is dropping, down to around 1,400 cfs. The water is clearing, and the river remains nearly void of fishermen, with a few waders in the upper section and the rare boat drifting down. 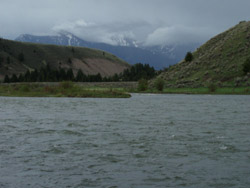 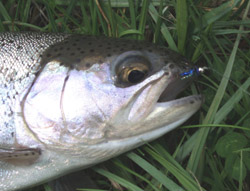 The fishing Friday, as it has been throughout the runoff, was OUTSTANDING. We wade fished for only a short time, being chased off the river by thunder boomers and the building lightning strikes on the foothills.

Our first stop was almost directly behind the lodge, and a short amount of wading produced about a dozen fish, eating the stone fly nymphs — HARD. From there, we drove upriver, fishing a favorite spot between Lyons Bridge and Sun West, which produced several more fish in short order. The fish were still biting the stones, but a few flying bugs also prompted bites on small trailer nymphs. Our third stop was above the West Fork, where the water is really starting to clear up. Several more fish were caught there, but the stop was cut very short by the threatening weather. The precipitation is easy to cheat; that’s why God created rain jackets. But when the lightning bolts start striking the hills, it’s time to get the heck out of Dodge.

The fish were hungry and eager, and literally every bug we tied on caught fish. Our bug list for the day included a Delektable™ selection of the #6 Gray Hurless, #6 Olive Hurless, #6 Mega Prince Standard Flashback, #16 Lil’ Red Spanker, #16 Lil’ Blue Spanker and the #16 Rootbeer Seringold: Delektable Flies Gallery 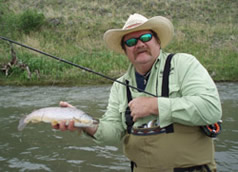 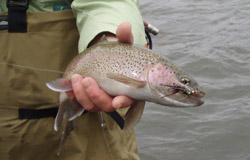 While we were driving around and wading, our newest shop geek, Charles P, fished for only a few minutes behind the lodge on his lunch break, and caught a huge rainbow on his third cast, which took a Delektable Badger Screamer behind a large rock, cast from the bank. We’re told there was a photo but it was not saved?? Charles P also floated the river on Thursday with his father. The day started slow but picked up, big time, in the latter part of the float when they started throwing streamers. 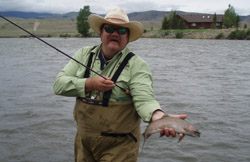 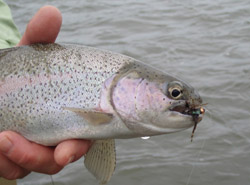 We also got a report from a good friend who floated Lyons Bridge to McAtee Bridge on Friday, and absolutely pounded fish on streamers. He didn’t keep a fish count, but he was almost giggly, calling the day one of his best ever; and this guy can really fish, so to be one of his best, it had to be an absolutely incredible day. 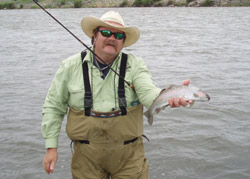 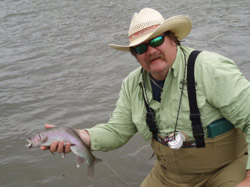 I fished Tuesday and Wednesday on the upper river and it was phenomenal. I also did very well yesterday, Monday, while fishing a short time during lunch. I don’t have much to add to Dan’s latest report except on Wednesday, with the water seeming to clean up just a little bit, the fish seemed to start spreading out a bit; off the bank and into deeper, more descript runs. They were still on the bank, just not as many. In addition, the fish seemed to eat more small bugs. The # 6 Delektable Mega Prince in Olive, the Delektable worm in Red and Orange, and most importantly, the # 14 Lil’ Red Spanker were all unstoppable: Delektable Flies Gallery Fishing started out very strong, with the fish biting the big bugs and worms. There was a noticeable slow-down around noon, then the # 14 Lil’ Red Spanker came out and the bite was back on. At the end of the day, fish were eating caddis emergers, and the # 18 Serengold and Green Sparkle Pupa both popped a few fish.

I hadn’t heard many reports lately on the lower river, so on Sunday night, after work, I drove down to check it out. The CFS below Ennis Lake was 4,110; IT’S ABSOLUTELY HUGE DOWN THERE, SO BE CAREFUL!! There were only a few bank runs, rock slicks and inside corners that weren’t so fast as to be unfishable. Luckily, because of the perception that the river is blown out and unfishable, even on a Sunday, there were hardly any people there. I fished one inside corner, probably three runs total, and hooked 17 fish in two hours. Red and orange worms were king. While it was light out, the # 18 Soft Hackle Pheasanttail hooked a few fish, but seemed to lose most of ‘em cause the fish were bending the little hook in the big water. I caught all rainbows while there was light on the water, but as soon as the shade hit the water, I got only browns. The only fish that ate a stonefly nymph all afternoon was a 19-inch brown, the biggest fish of the afternoon, that ate the # 6 Brown Pat’s Rubberleg.

Embrace the dirt and GO FISHING!