Posted on June 17, 2016 by Beartooth Flyfishing

Emmett took his days off to go to Yellowstone to catch fish. Among the chaos of the many people from all parts of the world, there was an abundance of fish to be caught. Emmett fished both the Gibbon and Firehole rivers, in multiple locations on each. There were plentiful hatches of Mayflies, Caddis, and Mosquitoes, with the fish eating all of the above. 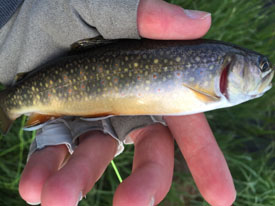 The best of the fishing was on the Gibbon River. The water on the Gibbon is slow, soft, and clear in the locations that were fished. The fish can be picky, but with the right fly, a good presentation, and a careful approach, the fish can be caught.  The best of the fishing was on a small Parachute Adams, although a very small Humpy could catch fish too. There was an abundance of Brown Trout, and Brook Trout, with each living in its particular stretch of river.

The fishing on the Firehole was good, but not as good as the fishing on the Gibbon. The fish were on average larger, but they were pickier, and harder to catch. The fish on the Firehole were eating caddis emergers right at the surface. If you could find the right emerger, you could get the fish to devour it, Emmett did not succeed in finding the right emerger, but did have luck on the Bomber Caddis dry fly. As the old saying goes “Trout don’t live in ugly places”, and it is definitely true in Yellowstone. It is always amazing to get to fish in one of the most beautiful locations on planet Earth, and it is even better when fish will eat a dry fly.